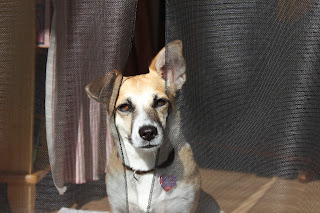 After a few years with our lovely dog Bixby we had settled into a happy zone of, I know what to expect of you and you know what to expect of me. He was past his destructive phase, except for an occasional shoe. He couldn't be bothered running away if given the chance. And he slept most days away.
Say hello to my fresh perspective, Frankie. Before we brought this new dog home, our house needed a good once over. I got down to a thirteen inch point of view, so as not to overlook any potential vet visits or escape routes.  A To Do list much longer than expected emerged.
Looking at my home from a foot off the floor exposed a world of cracks, cleaning, and caulking that I would have blissfully stayed ignorant of, but now begged for correction. The house is grateful for this fresh look, even if I am not.
I began to wonder if my illustration portfolio needed such an inspection. Getting a new perspective of my work, my be the answer to my ho hum feelings about promoting it.  After careful scrutiny, I've decided my portfolio needs a complete demo and remodel from paper to paint.  Not sure yet if I should be thanking this pint muse yet. 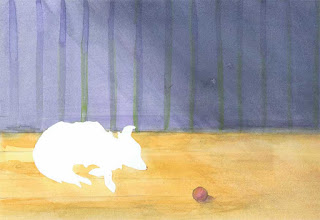 Today my crazy, obnoxious, much loved dog passed away.
No comments:

Take a joy ride with your muse. Say, “Yes!”  Accept the invitation.  Give over complete control and no back seat driving. Let her take you to a new landscape, new diner, or new town. See it through the eyes of a stray dog or your grandmother.  You can say yes without guilt. It’s necessary for you and your art. Don’t wait until your blocked to finally pick up your head and look around for inspiration.  Make time each day, each week to enjoy this friendship with her. She’ll nourish your creativity helping you over little speed bumps before they become impassable mountain roads.  Once you’ve opened yourself up to her influence, you’ll know she’s not keeping you from working. Instead, she’s showing you that play is part of the work.
A little play-date with our muse can keep our inner child from being bored to frustration.  It might be a short detour into your backyard to pick some flowers to draw, writing and chanting silly mantras or making a list of five things to be grateful for. Or whether it’s a time spent at a messing around with a new medium or sketching dogs at the local shelter.   She’ll lead you right back to your easel inspired and eager to create.
No comments:

Embrace your fear. Give it a big hug. Tell it you love it for making you what you are. Then leave it stunned in your wake.
No comments:

Back to a year ago:
The Morning Pages had been doing their job. They cleared my brain and kept it swept clean.  I had thrown open the curtains and let in the sunshine. Soon I realized that my “place” wasn’t as clean or safe as I had thought. There was a sour thing living in my subconscious and until then I wasn’t even aware she existed.  The morning pages were keeping my “space” clean, but deep in the corners, a destructive Beast was lurking.  She had been fed for years by crummy criticisms and damaging doubt.  Unbeknownst to me, she had gnawed at my productivity and pooped on my selfesteem.  Her protests were beginning to drown out the barely perceptible singing of my Muse. Something had to be done. I needed to stay this Beast.  No wonder my Muse had been in hiding.
Long long ago I had lured the Beast in with crumbs of, “Can’t I just have clear skin?” or tidbits of, “Why do I have red hair?” Over the years she grew fat munching mantras of, “I’ll never be a good artist with handwriting as horrible as mine.”   Over time I fed her choice meals too. Like, “I suck,” or “I’ll never get published,” or one of her favorite banquets, “I wish my art looked like blankity blank.”
But now she was being deprived. I had been getting rid of the junk thoughts with my Morning Pages and the Beast had begun to starve. She was coming out of the shadows and wanting to be fed.
Old habits die very hard. I needed to be proactive.  So I turned to the book, The War of Art, by Steven Pressfield.  http://www.stevenpressfield.com/the-war-of-art/  In it he writes about artists who think of themselves as either professional or amateur. Clearly keeping a destructive beast that feeds off my negative thoughts was an amature move.  I had been feeding her daily and without limit.  Words, never spoken, but often repeated got me into this pickle so words were going to get me out. I began and ended each day’s writing with “I Am A Pro.”  Over and over I fought off any subconscious mutterings with this saying. These words became my sword and shield.   The Beast grew in her protestations, but I had many more positive words to write and recite and begin to believe. Daily I served up inspired indulgences to my Muse.  Over the year the whining and tantrums have quieted.

The Beast isn’t yet gone, but I will keep her at bay and allow my Muse a safe place to play. And I am the happiest I've ever been in my art making.
No comments:
Newer Posts Older Posts Home
Subscribe to: Posts (Atom)

kat mcd.
I am a mom, wife, friend, sister, dog companion, who loves to paint, draw, read and watch my dog dream.

Blogs to Blab About